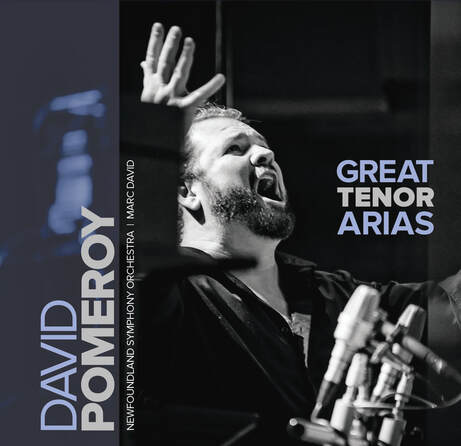 The CD is now available in store and online at Fred’s Records (Newfoundland) and for download and streaming across all major digital music platforms.

“David Pomeroy is a highly gifted and accomplished artist in the prime of his opera career,” says Marc David, Music Director and Principal Conductor of the Newfoundland Symphony Orchestra. “It was a real pleasure to have the opportunity of immortalizing his beautiful voice accompanied by the excellent playing of his home orchestra.” The arias recorded represent some of the major milestones of Pomeroy’s 20-year career, including the beloved “Nessun dorma” by Puccini.

Pomeroy is the only opera singer from the province of Newfoundland and Labrador to have an international career, spanning five continents. The New York Times describes him as a “powerful agile tenor… heartfelt” and Germany’s Das Opernmagazin exclaims “this is how a god sings!” Now residing back in his hometown of St. John’s, David Pomeroy is enjoying a career across the world’s greatest stages. He made his Metropolitan Opera debut in 2009 in the title role of Les Contes d’Hoffman, opposite world-renowned soprano Anna Netrebko. During his time at the Metropolitan Opera, Pomeroy also performed the title roles of Faust, and Roméo (Roméo et Juliette) under the batons of Placido Domingo and Yannick Nézet-Séguin.

The album, recorded just before the COVID-19 pandemic, was produced by Grammy and Juno Awards winning producer Denise Ball (CBC’s Saturday Afternoon at the Opera & In Concert) and received funding from Music NL, Arts NL, and FACTOR Canada, as well as a number of generous private donors and foundations, including the Gill Ratcliffe Foundation and Danny Williams Fund.